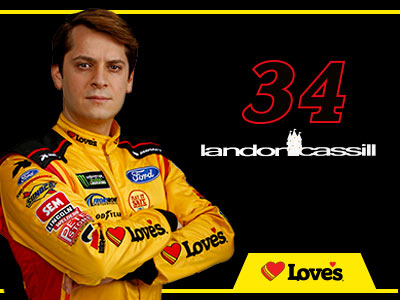 NASCAR season is almost here, and Love's Travel Stops is delighted to be part of excitement again this year. Love's is continuing its partnership with Front Row Motorsports, and we are proud to announce the driver of the No. 34 Love's Ford Fusion for the 2017 Monster Energy NASCAR Cup Series is Landon Cassill!

Love's will sponsor 18 races for the 2017 season including both races at Texas Motor Speedway, the Bristol night race and the season closer to crown the champion at Homestead - Miami.

The Iowa native has been behind the wheel of full-size race cars since his high school years. As the test driver for Hendrick Motorsports, Landon earned four Championship rings with the No. 48 team during its legendary dominance between 2007-2010. This will be Cassill's second year racing for Front Row, and he's a seven-year veteran of the Monster Energy NASCAR Cup Series.

"I can't wait to work with Love's," Cassill said. "They've been a great partner with Front Row over the years. I got to spend some time with them last year, so I already know they're a great group. They use their program in a really smart way that's good for their business, and I look forward to getting more involved with that. We're going to have some fun."

If being a professional NASCAR driver wasn't impressive enough, Cassill also spends his free time competing in triathlons. The family man even brought his son for a jog around the track.

You will see Cassill in the No. 34 Love's Ford Fusion for the first time at Speedweeks at Daytona International Speedway next month. The No. 34 team will compete in the Can-Am Duel, the qualifying races for the Daytona 500, Feb. 23. The Daytona 500 is scheduled for 2 p.m. ET Feb. 26 and will air on FOX.