From fleets to families: A growing role for CNG

From fleets to families: A growing role for CNG 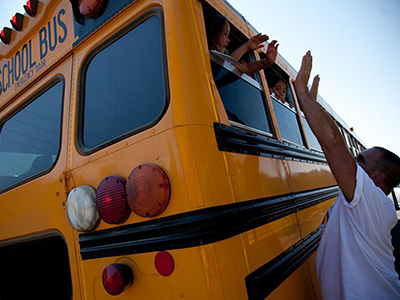 With the summer season winding down and the new school year in full swing, commuters are sharing the roads with big yellow school buses. The American School Bus Council estimates there are about 480,000 school buses hitting the roadways in the U.S. every school year, making the school bus industry the largest form of mass transit in the country.

One way to improve air quality in communities across the U.S. is to transition school bus fleets and other mass transit buses towards cleaner-burning compressed natural gas.

The opportunity for cleaner air

According to the advocacy group, Natural Gas Vehicles for America, communities are missing opportunities for clean, cost-effective and reliable transportation fuel by not relying on CNG to fuel their school and city transit buses. If the decision makers of these massive fleets were to transition to CNG as a fuel source, communities would not only benefit from fuel cost savings, but in the case of school buses, children would benefit from a healthier ride to and from school.

Fleet decision makers concerned about the cost of converting to CNG may be surprised once they take a closer look at long-term fuel savings. Contracted natural gas prices are not only cheaper than diesel, but remain stable over a number of years. Fuel savings start to add up quickly with up to 2,300 diesel gas equivalents consumed each school year per bus. In addition to the fuel savings, natural gas buses are easier to maintain, yielding further cost savings.

Investing in a greener bus fleet

Some districts are already seeing the benefits to the environment as well as student health by converting to a CNG fleet. The Los Angeles Unified School District (LAUSD) Transportation Branch operates the largest fleet of CNG school buses in California, with about 529 clean-burning CNG school buses on the road. The district continues to construct CNG fueling stations to support its growing fleet.

The Lee's Summit R-7 School District, part of the Kansas City metro area, placed one of the largest one-time orders for CNG buses in U.S. history when it secured 106 CNG buses for the district about four years ago. The move was part of the district's goal to realize $11 million in fuel savings over the next decade by transitioning to CNG.

Fleet managers and school districts still balking at the upfront investment for CNG fleet conversion can explore numerous cost-sharing options, including federal, state and local programs. For example, the VW Settlement's Environmental Mitigation Trust (EMT) Fund has millions available in funding for states to replace older diesel vehicles with cleaner-running ones, including Type-D buses. The funds can be used to offset as much as 25 percent of each new natural gas school bus. Other potential sources of funding include Environmental Protection Agency's Diesel Emissions Reduction Program, the Department of Energy's Lower-Emission School Bus Program and similar sources, including local grants and assistance

Converting your school or transit bus fleet may sound daunting, but a partnership with Trillium CNG provides you and your clean fuel at lower prices. When considering an investment in CNG station infrastructure, in addition to vehicles, there is an opportunity to amortize the cost through long-term fueling contracts. This alleviates the burden of high, up-front capital costs for a station build and guarantees operational excellence.