Donnie Haire is on the road five days a week. His workweek starts on Sunday when he gets on a plane in Oklahoma City and flies to Tennessee. As Facilities Maintenance Manager, Haire makes sure the equipment is running properly at more than 60 locations in five states.

"When equipment fails, it doesn't just hurt our Customers, it hurts our employees as well," Haire said.

Haire's career at Love's began in his hometown of Haubstadt, Indiana. He was working part-time at one of the competitor stores when it was purchased by Love's as part of another truck stop merger.

"It was kind of scary at first," Haire said. "Most times with a buyout, companies clean house." 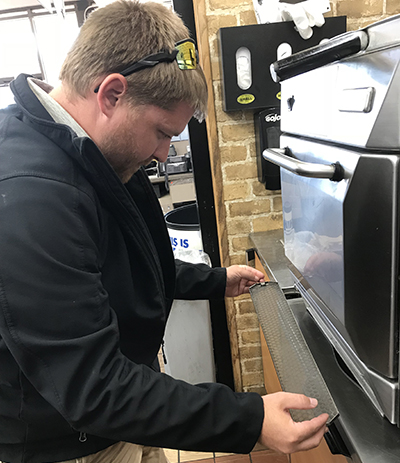 From microwaves to sinks and coolers, Donnie Haire makes sure the equipment is working at more than 60 Love's locations in five states.

"Love's has taken care of me for almost the last ten years," Donnie said. "They gave me the opportunity to move up."

Haire considered focusing solely on his full-time job, but he decided to give Love's a chance.After six months, Haire went full time as a Tire Care Technician at Love's 414 and left his other job behind.