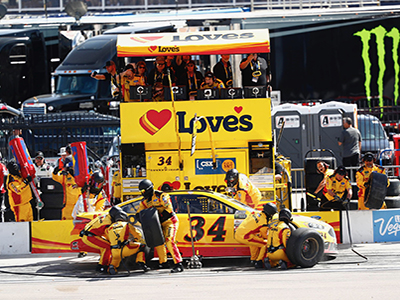 From the NASCAR hauler parade on the Vegas Strip to meet and greets before Sunday’s race, Front Row Motorsports driver Landon Cassill  had a nice time in Las Vegas.

Between cautions and some damage to the car, the Kobalt 400 presented some obstacles for Cassill and the Front Row crew to overcome. After a restart, Cassill completed the race with a P27 finish.

"I thought our Love's Travel Stops Ford was a pretty good car and the race just kind of kept going the wrong way for us with the cautions,” Cassill said. “Then I got in the wall into turn 3 and gave us just enough damage that we didn’t have quite as good of a car as we had most of the race. That kind of put us back a couple spots. I still feel like we’re better than previously, and I’m looking forward to Phoenix, where we had a top-20 run last year."

Even though Cassill won’t be in Love’s car this weekend in Phoenix, the next time you’ll catch him in the bright yellow No. 34 Love’s Ford is March 26 at Auto Club Speedway in Fontana, California.